To her students, Miss Kirby, to family, Juno or to friends, Barbara, we in the Anglican Community of the Sisters of the Love of God in Oxford knew her as Sister Barbara June.

She was born to Scottish parents in India in the foothills of the beautiful Himalayas; her father was a tea planter in Darjeeling. After World War II she came to England, joining other family members in Southampton.There she received a sound grammar school education, following which she read for an arts degree at the University of St Andrews and entered our Community immediately afterwards in 1955. That was hard for her family; the pain of separation surfaced in her later years. She had to promise her father that if anything happened to him, she’d leave to care for her mother and young sister, Priscilla. He did die young, two years later, and she returned to Southampton.

Her fortitude in providing for her family is impressive. Miss Kirby now had unexpectedly to find paid work and began teaching: supply at first, then in Swanage.

In 1959 she went to St Mary’s School, Gerrards Cross, but two years later her mother died and she returned once more to Southampton to care for her sister. In 1962 she began her teaching at St Swithun’s, principally English, and stayed until 1966. She then entered the Community again, her sister being married now with a young child. I first met Sr Barbara June in 1977 and I entered the Community the following year. Tragically, Pris was killed in a road accident in 1978, yet mercifully the memory seemed not to plague Sister’s final years, given the age gap. Mostly she missed her parents and a first cousin who grew up with her in India.

In the last years of her life, she faced multiple losses courageously: health, sight, hearing, mobility and, as dementia claimed her, speech and ability to make sense of the world and of abstracts. Her last two and a half years were in residential care, the final year being at the height of the pandemic, with the pain of severely restricted visiting; she didn’t catch COVID, however, and thankfully it was possible for me to be with her when she died.

Sr Barbara June perhaps had three ‘vocations’: her first, and last, as a nun; a second as a teacher; and her third, from 1997, as an ordained priest exercising pastoral ministry. A St Swithun’s teaching friend told me she was an inspirational teacher. I can recognise this from the classes she gave to her Novices when Novice Guardian and from her individual teaching and example. She loved babies and children of all ages. Even at the care home, she longed to teach or instruct or just be of service to others, saying, “I just long to have a class,” or regretting she had not been able to help anyone all day!

She loved language, literature and all things German and was also a spiritual teacher. She had a strong visual sense, loving pictures and outward symbols speaking of deeper realities, including religious ones. She was a wonderful companion on holidays and days out. At the home, she often longed to go back to India, to Scotland, or just the convent garden to see the poppies growing there. She was a remarkable character, who leaves a gap which will not be filled. 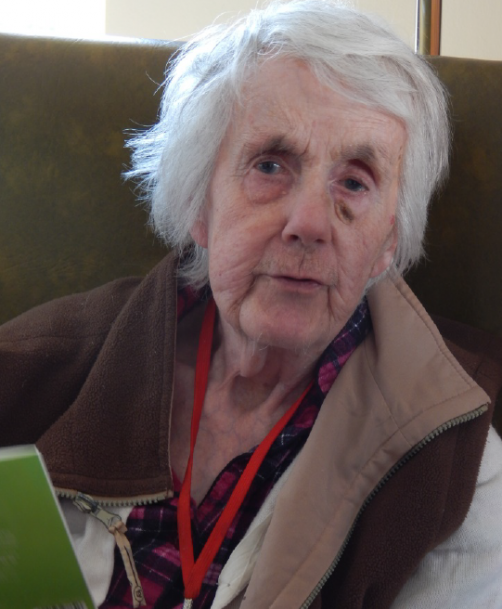