Rosanna (Zanna) Baker is a captain in the Royal Artillery and was one of six women, all serving members of the British Army or Army Reserves, known as the Ice Maidens who made history in January 2018. The six-strong team broke an Antarctic record by becoming the first all-female group to ski across the continent using only muscle-power, travelling more than 1,000 miles in 62 days. They travelled unsupported, carrying all the equipment and supplies they needed. The Ice Maidens used their expedition to raise funds for Breast Cancer Care and the Army Cadet Forces Association.

When she was 18, Zana was inspired by a two-month mountaineering and scientific expedition. From that moment, walking to the South Pole became her life ambition. It was this and a love of the outdoors that set her on the path of a military career. However, she studied art and geography, then specialised in music and languages before finally being commissioned from the Royal Military Academy at Sandhurst. She is currently working in the Defence Cultural Specialist Unit.

On her return from Antarctica, Zanna said "There is a small part of me that wishes I could just pause time and freeze the moment, so I can truly appreciate where I am and what I have been doing. I am actually quite excited to get back to work and see what could be around the corner."

Zanna was a pupil at St Swithun’s prep and senior school, and she regularly lends her time and talent inspiring students and teaching them about working in the British forces. 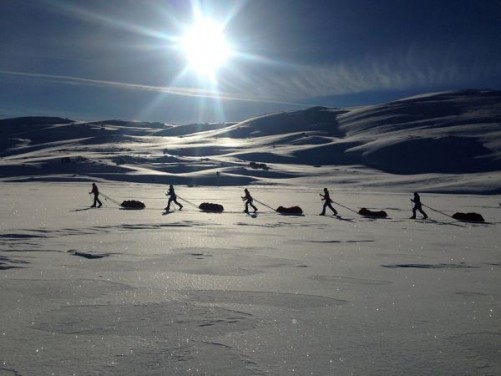